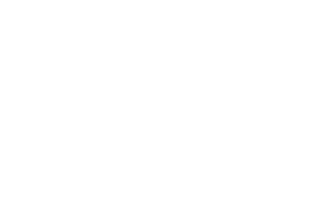 Faithless have released their first studio album in over ten years – ‘All Blessed’ including the track ‘Innadadance’ ft. Suli Breaks & Jazzie B.

Jazzie B On The Decks

Jazzie B is world-renowned for spinning the biggest and best Soul, R’n’B, Hip-Hop and Dance classics. Catch a live DJ set from Jazzie at venues across the UK in 2019!

Check out the original hand drawn Derek Yates art prints on a multitude of t-shirts in the official store. An amalgamation of music & style!

Black Is The New Black

Black is the New Black: Portraits by Simon Frederick ran at National Portrait Gallery earlier this year. You can view the full collection of photographs online.

Every Sunday tune in to Jazzie B’s Mi-Soul II Soul Show, which features an eclectic mix of funk and soul from the original Funki Dred, every Sunday from 3-5pm on mi-soul.com! 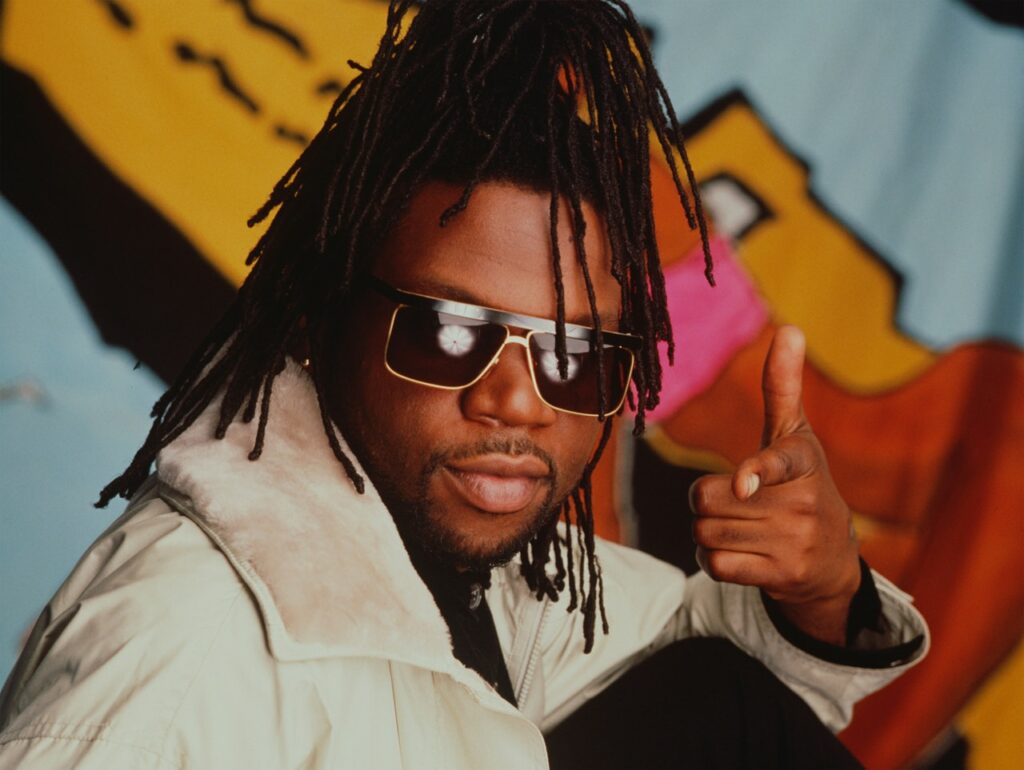 Although Jazzie B and Soul II Soul will always be connected, both spiritually and substantially, that has never been all Jazzie has been about. For years now, he has built a parallel career away from the collective, one that allows Jazzie to advance his own ideas and character. Among his more eclectic achievements as Jazzie B, he has been a regular on London radio since Kiss FM was a pirate – he is currently on Solar Radio, Sundays 2-4 pm and also does a variety of voice-overs for radio and television. He has had a spell running Motown in the UK, designed a sneaker for the Lacoste Legends range and presented James Brown with the Diesel U Music Lifetime Achievement award – an honour the late Mr Brown would accept in person on the one condition that it was Jazzie who presented it to him. But on a more day-to-day level, welcome to Jazzie’s world…

In the Studio
For as long as there has been a Soul II Soul success story and studios, there’s been a procession of artists through the doors to take advantage of Jazzie’s production and remixing skills.

Jazzie co-wrote and produced a series of tracks with the Godfather of Soul himself, James Brown, including Just Do It, Watch Me and Show Me Your Friends. He’s produced Teena Marie, Cheryl Lynn and The Jones Girls; and co-produced Maxi Priest and The Chimes.

He has remixed for, among others, Public Enemy (So Whatcha Gonna Do) Johnny Gill (Wrap My Body Tight); Fine Young Cannibals (I’m Not The Man I Used To Be); Incognito (Change); and, perhaps most memorably, Family Stand’s international smash hit Ghetto Heaven.

Jazzie has also put together some of the greatest club classics collections of recent years, drawing on his sets from the legendary Africa Centre parties and other dances from back in the day.

DJ & Fashion
Jazzie B is an in-demand DJ, playing out as far afield as the USA, Dubai and Croatia, and rocking prestigious houses such as the Lovebox Festival; the Southport Weekender; the Baltic Festival; and the Red Bull Music Academy Culture Clash at London’s Roundhouse in 2010, in which Jazzie’s club classics held their own against Trojan, Metalheadz and Digital Mystikz.

The emotional high point of Jazzie’s DJ career, though, was Back II Life Antigua, a one week festival with a series of sophisticated events hosted by the original sound system DJ’s; Jazzie B, David Rodigan, Trevor Nelson & Norman Jay; at some of the worlds most stunning and exclusive venues, including Jazzie’s house.

His total look, the ‘Funki Dred’ continues to grow and change each season, infusing Jazzie’s every endeavor with its vibrant brand. 2013 saw the launch of his Classics Collection with Harvey Nichols; a high end, raw, handmade collection which illustrates the ‘do it yourself’ energy of those early sound system days. Jazzie B’s aesthetic remains fully global. When he performs, he is an envoy of style as well as of sound.

Speaking & Teaching
Had Jazzie, as a teenager, not gone in to the music business full time, he would have become a PE teacher. Indeed, for about six months the two career paths ran in parallel as Jazzie tried to combine teacher training college with running the sound system. Something had to give, and lucky for us, if perhaps not so much for a generation of UK athletes, music won out. Since then, however, Jazzie has gone on to become an official FA coach and has worked with youth football teams in North London.

His natural communication skills haven’t gone to waste either; he has given talks, with Q&As about his life and the adventures of Soul II Soul all over the country; lectured at Cambridge University; spoken about the changing face of the global music business at Manchester’s annual In The City music conference (2011); talked extensively about sound systems and sound system culture for the Red Bull Music Academy; and taught music and music technology at Jamie’s Dream School for Channel 4 in 2011.

Honours
Of course all of this hasn’t come without recognition. Jazzie has been honoured for his services to the community as well as his music.

In 2008, Jazzie became the first UK sound man to be invited to a Buckingham Palace investiture, when he was awarded an OBE for services to music, by Her Majesty the Queen. In the same year, he was awarded the inaugural Ivor Novello Award for inspiration; when it was presented to Jazzie, the announcer described him as “the man who gave British black music a soul of its own”.

A sentiment few will argue with, but his most personally significant recognition was yet to come. In 2013, Jazzie was honoured by his birthplace, Finsbury Park, when local residents selected three distinguished sons and daughters of the area for their contribution to and inspiration for the community. An ironwork sculpture of him now stands at the Portrait Bench by the station forecourt, alongside suffragette Edith Garrud and health pioneer Florence Keen. 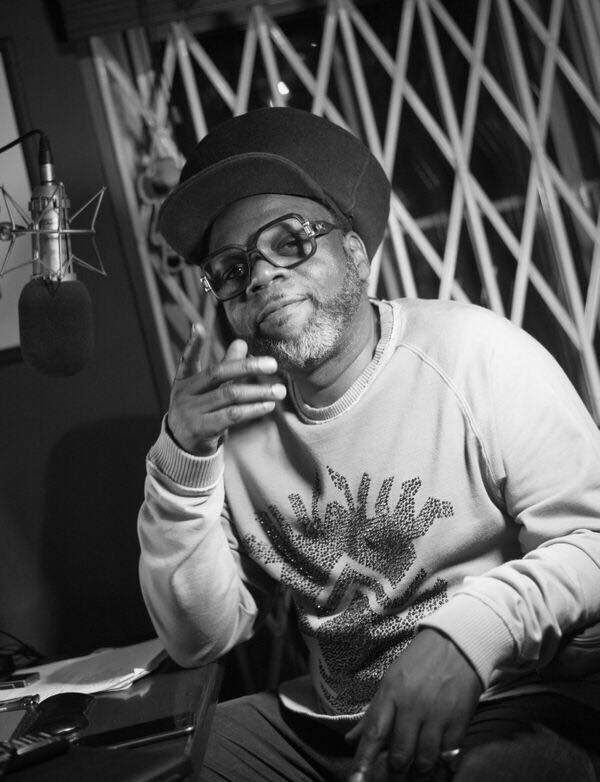 Jazzie B presents the ‘Back II Life’ radio show every Sunday on Solar Radio. 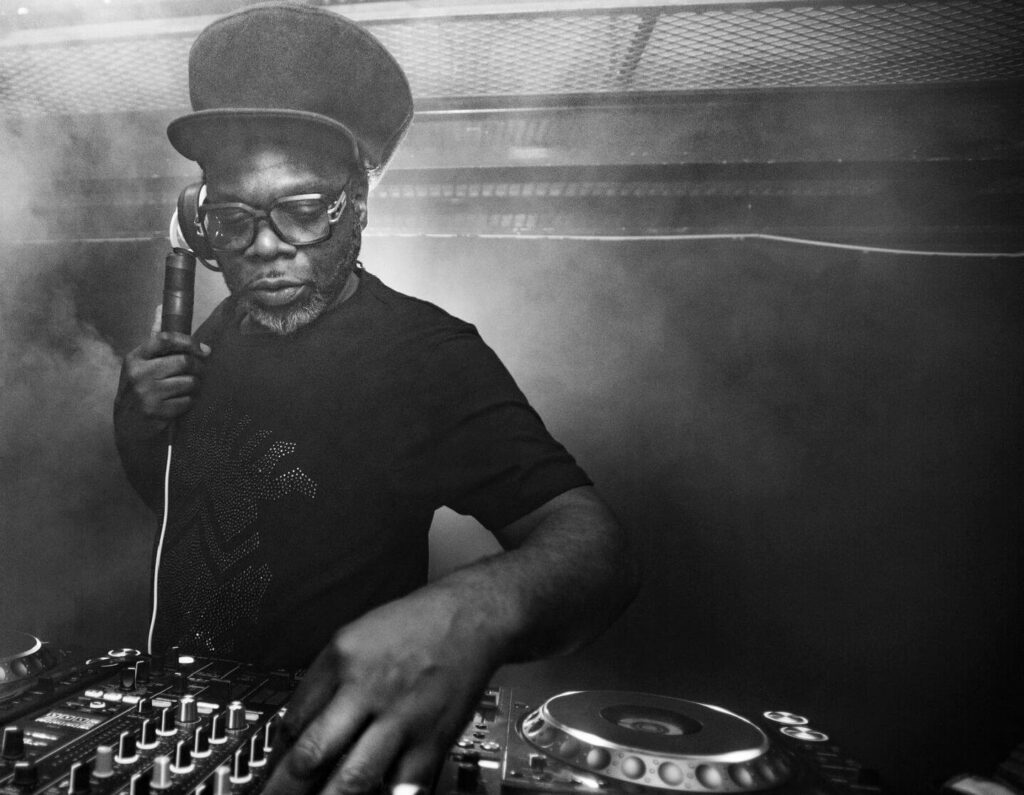 There are currently no scheduled events.
DJ Bookings

Back to Life:
The Collection

Masterpiece created by Jazzie B

As Jazzie himself puts it: “Soul II Soul has always been as much of a lifestyle statement as a musical movement.

Our aim is to put some of that harmony into life with the philosophy of a happy face, a thumping bass for a loving race, and the clothing is coming from the same place as the music, allowing people to identify with these ideals 24/7.

The new designs aim to recapture that spirit and make the same statements as before, in a time when we need that harmony more than ever.”

Soul II Soul clothing: for the way we live.

Sign up to the Jazzie B email list to be the first to receive special offers, news and access to tours and tickets from the Funki Dred!

You can unsubscribe at any time by clicking the link in the footer of our emails.
We use Mailchimp as our marketing platform. By subscribing, you acknowledge that your information will be transferred to Mailchimp for processing. Learn more about Mailchimp's privacy practices here.